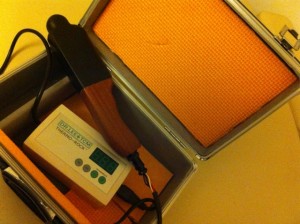 Bianshi Stone is a black stone, named after Si Bin liquid stone, which is found in Si River and seems to float just below the water’s surface.

Bianshi stone has an unusual composition of calcium, iron, phosphorus and other minerals, which gives the stones a lower radiation than other stones. These minerals and water flow gives the stones smoothness that is soft against the skin.

Treatment with liquid stone is even older than acupuncture and can be more accurately described as acupressure. Knowledge of Bianshi stone was lost for hundreds of years until recently when they found some old medical texts, which led to that one again began to exercise it, and the stones were rediscovered.

Whereas acupuncture treats the nerves, acupressure with warm Bianshi stone acts on the muscles and bones. Uses as alternative to acupuncture needles. Bianshi stone is a special kind of stone that is used to treat certain part of the body, especially the back and neck. Bianshi stones can form infrared effect and ultrasound.

They are used especially for “cervical spondylosis” against acute or chronic pain in the lower back. Bianshi Stone therapy is effective to regulate Qi, Blood, Yin and Yang, cure rheumatism and “fire” out from the body.