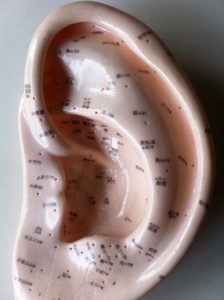 Auricular therapy, or ear acupuncture is a form of alternative medicine based on the idea that the ear is a micro system which reflects the entire body, represented on the auricle, the outer portion of the ear. Conditions affecting the physical, mental or emotional health of the patient are assumed to be treatable by stimulation of the surface of the ear exclusively.

In TCM, the ears are an important pivot point for the meridians to communicate with each other. When the organs are in disharmony, it will be reflected on the ear. Fetal somatotop and Nogier’s inverted somatotopy have been analyzed. The similarity between the localization of the motor and somatosensory representations of the ear in the cerebral cortex in the fetus has also been noted in both Western and Chinese journals.